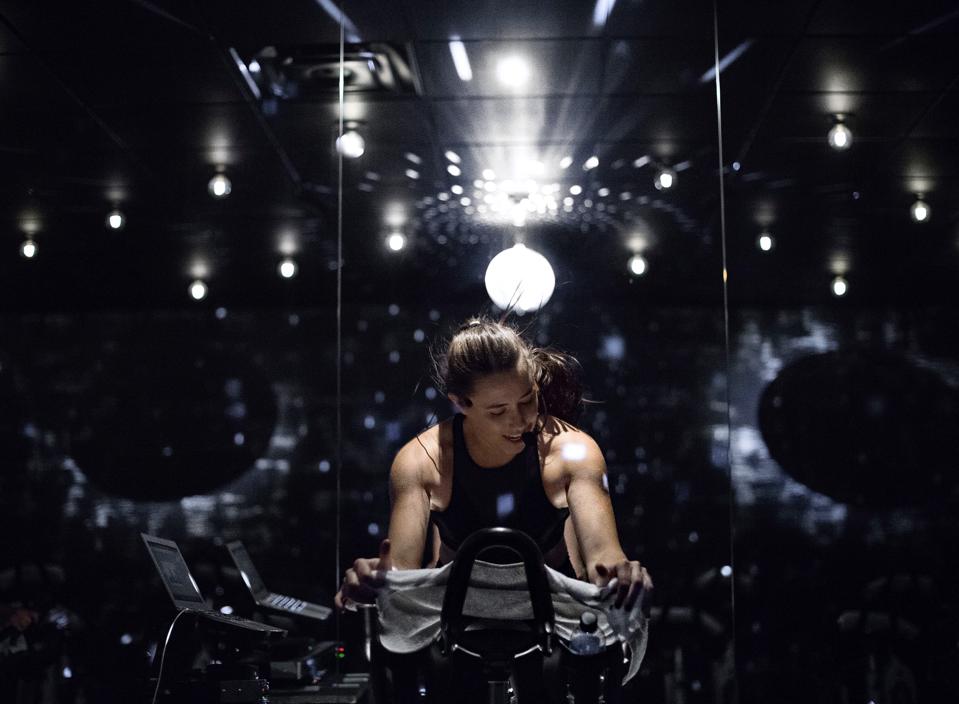 For those of us who monetize our passion, the lifestyle of entrepreneurship can often take a mental and physical toll on our bodies. Managing your own time means working around the clock which makes it difficult for some entrepreneurs to fit a healthy amount of sleep and regular fitness training into their booked schedules.

For Michelle August, founder of indoor cycling studio SPINCO, building a community, moving past fear and taking calculated risks are not only the foundations of her business but the keys to success for busy entrepreneurs.

Starting SPINCO just five years ago at the age of 22 years old, she cultivated a dedicated following and has grown the business with over 400,000 riders across Canada. However, this success started with uncertainty at the beginning of her journey. Moving back home to Kelowna, British Columbia after completing a basketball scholarship in California, she initially worked for her family’s automotive business. She quickly recognized that selling cars was not her calling and the lack of community left her unmotivated and inactive. This is where the idea for creating SPINCO was born. Leaning into her core values of community and fitness, August created the type of environment for customers that she desired for herself. “I was not only working out for myself, but I was working out for my team and those around me and that was a huge motivator for me. That’s what SPINCO has been built on,” she recalls, “It is for pushing those people that are in your class, motivating and inspiring those around you as well. Feeding off their energy is a huge part of what SPINCO is today and the main reason why I originally started it in the first place.”

The lesson learned in this experience is that the work starts with you. We all know fitness is important to our health, but did you know it could also be critical for your business? Here, August shares three reasons why taking care of yourself and your teams means that your business will maintain an edge over the competition.

The Four Leadership Personas Of The Fourth Industrial Revolution—Which One Are You?

$50 Off The Limited Edition Amazon Echo With Oak Finish

Fighting Ebola With Road Shows And Radio Spots In Burundi

A Pivotal Role In Business Health

For every benefit of being your own boss, there is a cost. Weigh gain, high levels of unmanaged stress, and chronic fatigue, are just a few of the ways entrepreneurs may neglect their bodies in order to grow their business. According to August, this way of operating not only affects the well-being of entrepreneurs but will also ultimately trickle down into the health of the company. Incorporating a schedule of consistent physical activity that challenges you helps. She says, “It’s kind of similar to what they say on airplanes, ‘You need to put your oxygen mask on before supporting those around you’.” Learning to fight through the doubts and obstacles in class or at the gym is the best training ground for building a resilient and determined mindset in your day-to-day lifestyle. Making yourself a priority will allow you to maximize your energy and increase your ability to care of your customers, clients and staff.

Mental acuity is sharpness of the mind. For sustainable entrepreneurship, being able to concentrate and understand the problem or task at hand, maintain focus and good memory are essential. All of these are driven and improved by stimulating different parts of the brain through exercise. Dr. Joe Kottoor, a chiropractor and rehab specialist who has worked with several Olympic athletes and Toronto Raptors players says exercise is one of the best, easiest and cheapest ways of doing it. “There’s research studies that show that [exercise] increases the size of the hippocampus- that area of the brain which is involved in memory and learning. Another one is the pre-frontal cortex, which is the frontal lobe,” he says, “It’s apart of the brain which is highly involved in ‘Executive function’.  Creativity, problem solving, comprehension and perseverance are important attributes to have as a leader.”

Working on tight deadlines or simply trying to manage a multitude of responsibilities each day is not only a challenge for owners but is tough on their teams as well. Research has found that exercise has tremendous benefits on people’s overall mood and ability to tackle their daily to-do lists. Findings from a study showed that people who exercised during work hours reported that their concentration increased by 21% and furthermore, 41% felt more motivated on days they worked out. At SPINCO, August notices more companies such as start-ups and even large investment organizations have begun to bring their teams in for group workouts. She notes, “I think just getting to that first class and proving yourself wrong is a huge first step for employers and staff.” Dr. Kottoor also recognizes this as an important element of creating a better work culture, “Employees that move are happier and more productive. Whether you’re the CEO of a company or you’re at the entry level, if you encourage people to move, then we see an improvement in individual happiness but also in work productivity.”