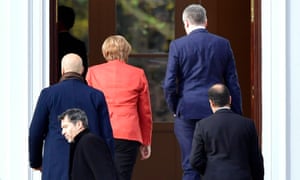 Analysts at Citigroup say the euro is being propped up by several factors – including the lack of clarity over German politics right now.

Over in Berlin, Angela Merkel arriving for a meeting with German President Frank-Walter Steinmeier at Bellevue Palace, his official residency.

Merkel will brief Steinmeier about the state of the coalition talks (nicht sehr gut!). Steinmeier is then expected to give a statement around 2.30pm local time (1.30pm GMT)

Euro volatility has risen this morning, suggesting that traders are more nervous about Europe’s prospects.

But…we’re nowhere near the levels seen in April, when Emmanuel Macron and Marine Le Pen were battling for the French presidency, as this chart shows:

Kathleen Brooks of City Index suggests the markets may be underestimating the risks from Germany.

Volatility spiked ahead of the French election, which turned out to be a boon for markets as Emmanuel Macron was easily elected President of France. The market got the level of risk wrong back in April, and were overly worried, could they be wrong this time and be overly complacent?

How this saga plays out in the coming days will be crucial for European traders. It’s not beyond the realm of possibility that Germany could end up being the biggest political hot potato for the Eurozone this year.

Since you’re here … we have a small favour to ask. More people are reading the Guardian than ever but advertising revenues across the media are falling fast. And unlike many news organisations, we haven’t put up a paywall – we want to keep our journalism as open as we can. So you can see why we need to ask for your help. The Guardian’s independent, investigative journalism takes a lot of time, money and hard work to produce. But we do it because we believe our perspective matters – because it might well be your perspective, too.

If everyone who reads our reporting, who likes it, helps fund it, our future would be much more secure. For as little as £1, you can support the Guardian – and it only takes a minute. Become a monthly supporter or make a one-off contribution. – Guardian HQ

A quick reminder of the result of September’s election shows why Angela Merkel is in a bind.

Having only won 246 out of the 706 seats in the Bundestag, the CDU/CSU needs coalition partners to form a stable government.

However, the maths is tricky, as the SPD isn’t willing to join another grand coalition.

That leaves four smaller parties; but ideological disagreements mean a formal deal with either the left-wing Die Linke or the far-right AfD isn’t feasible.

So a deal with the Greens and the the FDP was the only option.

Christian Odendahl of the Centre for European Reform reckons the SPD could help prop up a minority administration.

Here’s a chart of the euro’s sharp moves against the US dollar this morning: