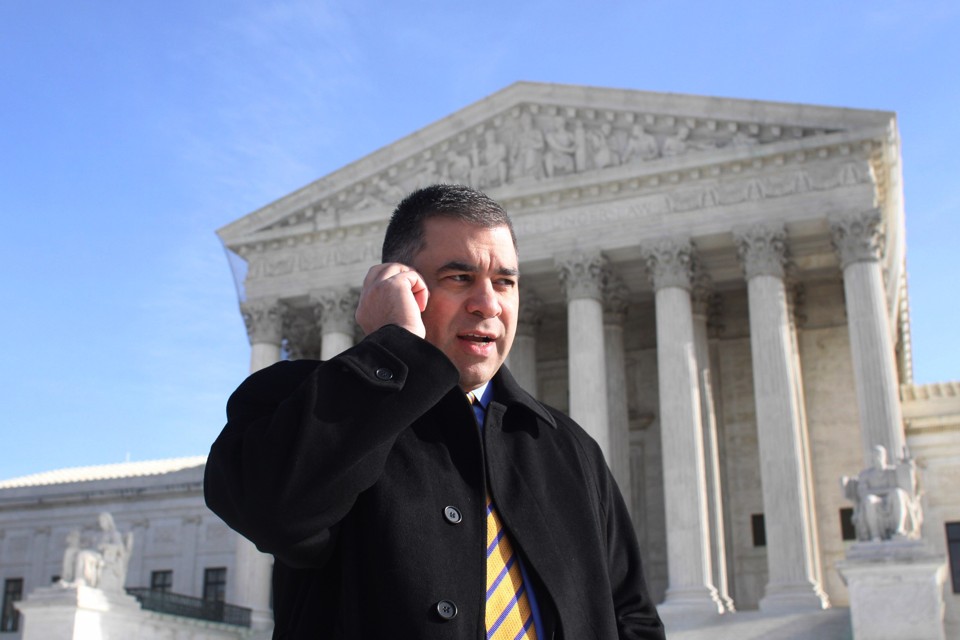 The Clintons have driven a lot of folks to distraction over the years. Connoisseurs of the 1990’s political wars will recall some of the more prominent members of Hillary’s vast-right-wing conspiracy: Richard Mellon Scaife, R. Emmett Tyrrell Jr., Larry Nichols, Joseph Farah, Christopher Ruddy, Ed Klein, David Brock (before his road-to-Damascus conversion), and, of course, Representative Dan Burton, whose quest to prove that the First Couple murdered Vince Foster led the lawmaker to recreate the shooting in his backyard using a watermelon as a stand-in for Foster’s head.

But maybe no one has devoted more of his life to toppling the House of Clinton than David Bossie, veteran activist and, fittingly enough, the brand new deputy campaign manager for Donald J. Trump. Going back to the 1992 presidential race, when he became known for his controversial dirt-digging on then-Governor Clinton, Bossie has emerged as Bill and Hillary’s Inspector Javert: dogged, ruthless, and 100 percent convinced of the righteousness of his crusade. He allows nothing and no one to divert him from the cause. (We are, after all, talking about the guy whose documentary Hillary: The Movie led to the Supreme Court’sCitizens United ruling that finished wrecking America’s campaign-finance system.)

With his decades-long fixation on Bill and Hillary, Bossie is not simply an obvious choice to aid Team Trump in its slash-and-burn mission to either defeat or, barring that, delegitimize Hillary. The 50-year-old crusader is, in many ways, an embodiment of the toxic, obsessive, vendetta-driven political spirit that animates Trumpworld.

Bossie came to national notice alongside his nemeses. During the 1992 election, the young conservative was dispatched to sniff around Bill Clinton’s sex life by the Republican operative Floyd Brown, the founder of Citizens United and father of such brass-knuckle political hits as the infamous Willie Horton ad. Bossie tackled the job with such zeal that he got called out on CBS Evening News for his rough handling of one woman’s family. The Washington Post recalled the segment in a 1997 profile:

Correspondent Eric Engberg reported that Bossie and a retired D.C. police officer, Jim Murphy, both working for Brown, had been harassing the friends and family of Susan Coleman, who had committed suicide years before. They were trying to confirm that Coleman shot herself “following a love affair with her law professor, Bill Clinton, that left her pregnant,” Engberg reported. Bossie and Murphy trailed Coleman’s mother to an Army hospital in Augusta, Ga., where her husband was being treated for a stroke. “Here the two men burst into the sick man’s room,” Engberg narrated, “and began questioning the shaken mother about her daughter’s suicide.” A chastened Bossie later told friends that the CBS story had made his grandmother cry.

After Clinton’s election, Bossie turned his attentions to ginning up the Whitewater scandal, feeding info to reporters and Republican Congress members alike. In 1995, he joined the staff of Senator Lauch Faircloth, a member of the Whitewater Committee. His reputation as a pitbull grew—as did the sense that he had it in for the Clintons. The Post profile quoted an anonymous GOP congressional staffer, who explained, “He’s a decent guy, he’s savvy, he generally knows how to deal with the press, he knows how to advance a story … But the problem is, he leads with his agenda, and that drives everything—and that just tends to undermine the credibility of the investigation.”

When House Republicans launched a probe into the 1996 Clinton campaign’s fundraising practices, Bossie wound up as the chief investigator for the member in charge, Dan Burton. Eighteen months into the job, Bossie was forced to resign for questionable tactics. (Specifically, he distributed selectively edited transcripts of investigators’ jailhouse conversations with the Clinton crony Webb Hubbell.)The New York Times reported that then-Speaker Newt Gingrich himself had pressed for Bossie’s ouster because the investigator had “become an embarrassment to the Republicans.”

That’s right. Bossie was such a shameless attack dog that he mortified even Newt Gingrich.

In 2001, Bossie took over as president of Floyd Brown’s Citizens United. There, he has kept busy writing books and, most energetically, producing documentaries skewering Democratic politicians and causes. According to the group’s web site, Bossie has produced 25 documentaries since 2004, including Occupy Unmasked, featuring the late Andrew Breitbart; The Gift of Life, featuring Mike Huckabee; and Rocky Mountain Heist, hosted by Michelle Malkin.

It was, however, Bossie’s anti-Hillary flick, produced with an eye to tanking her 2008 presidential candidacy, that rocked the political world. The FEC contended that airing TV ads for Hillary: The Movie would constitute the sort of “electioneering communications” barred by the McCain-Feingold campaign finance reforms of 2002. But the Supreme Court, in a 5-4 split, ultimately disagreed, in the process redefining campaign-finance law to grant corporations the same freedom of speech (read: the freedom to spend great wads of cash advocating for political candidates) as individuals.

Still more recently, Bossie and Citizens United have been dissecting Hillary’s tenure as secretary of state. The group spent much of January suing the State Department for access to the emails, agendas, and travel manifests of former Hillary aides—and family: mustn’t forget Chelsea!—in its search for evidence of inappropriate coordination between State and the Clinton Family Foundation.

In joining Team Trump, Bossie finds himself again on the front lines of the Clinton Wars—this time in the service of a candidate who has repeatedly proved himself to be without shame, ethics, restraint, or a basic sense of decency. As such, Trumpworld may be the anti-Clinton enterprise Bossie has been waiting for his entire adult life.

Then again, political obsession always carries the risk of overreach. Just ask Newt Gingrich. Or look at poor Javert, who wound up consumed and destroyed by his obsessive vision of justice. And he wasn’t pursuing a quarry nearly as deranging as the Clintons.