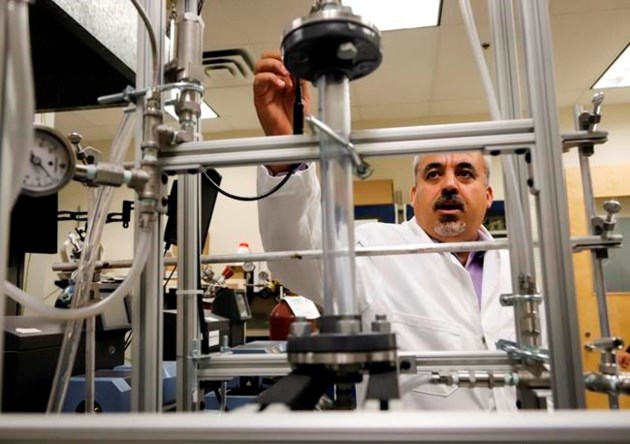 The Split Flow Integrated LNG process uses specialized materials and chemistry to remove carbon dioxide and other impurities from the natural gas stream without having to cool and then warm the gas, as is done now in the leading LNG process, say its developers, associate professor Nassar Nashaat and student Arash Ostovar of the Schulich School of Engineering.

The result is that capital costs are reduced because less equipment is needed, while operating costs and greenhouse gas emissions are lowered because less energy, water and chemicals are consumed.

The duo are seeking an industrial partner to use the technology on a pilot basis to prove its benefits.

“We have plenty of natural gas resources here in Alberta and existing facilities where our technology can be integrated,” said Nassar, estimating there are 50 potential locations.

“The idea is that anybody who is producing natural gas can now produce LNG.”

Proponents tout LNG as a transition fuel which can replace coal or diesel as a more environmentally friendly way to generate electricity and power vehicles. Natural gas volumes are reduced by about 600 times when converted to LNG.

But environmentalists have charged that building B.C.’s many proposed LNG projects — including the $40-billion LNG Canada project led by Shell Canada which is now under construction — will make it impossible for the province to meet its GHG emission reduction targets.

Travis Balaski, vice-president of Calgary-based Ferus Natural Gas Fuels, said he was impressed after seeing a presentation on the new LNG technology but is concerned about its actual operating costs.

“This technology is obviously quite attractive to a company like us but it’s got to be proven before we would ever be in a position to deploy it,” he said.

Ferus is planning a $40-million expansion to triple the output from its LNG plant near Grande Prairie in northern Alberta.

The five-year-old plant produces about 50,000 gallons of LNG per day from about four million cubic feet of natural gas.

The new LNG technology also produces a purer carbon dioxide as a byproduct than conventional technology, Nashaat and Ostov pointed out.

Balaski said that’s another selling point for Ferus as its sister company sells carbon dioxide to customers for use in oil and gas enhanced recovery operations.

The technology developers are hoping to find a partner to build a project that produces about 500,000 pounds of LNG per year, enough to power a 250-megawatt electrical generation plant.

The LNG Canada project is designed with capacity for 14 million pounds of LNG per year.

This report by The Canadian Press was first published on Friday, Sept. 20.