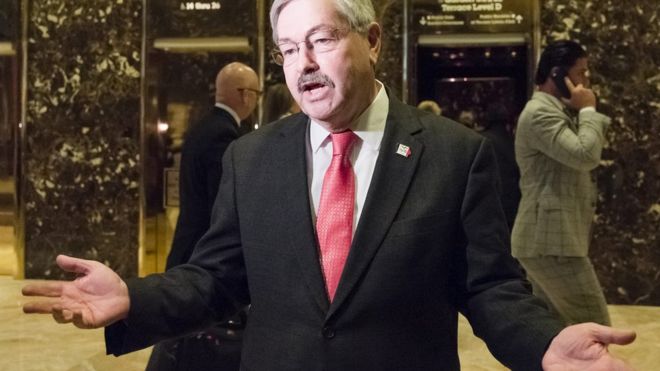 owa Governor Terry Branstad will be nominated by Donald Trump to be US ambassador to China, US media say.

Mr Branstad was seen entering Trump Tower in New York on Tuesday for talks with the president-elect.

“We welcome him to play a greater role in advancing the development of China-US relations,” said Foreign Ministry spokesman Lu Kang.

However, Mr Branstad’s spokesman said reports of the nomination were “premature”.

Mr Trump has also reportedly tapped General John Kelly to run the Department of Homeland Security, according to US media.

Mr Kelly would be the third general Mr Trump has selected for a high-level position in his administration.

Mr Branstad’s appointment is seen as key at a time of trade tensions between the world’s two biggest economies.

Mr Trump has accused China of “raping” the US by devaluing its currency and giving itself an unfair exporting advantage.

There has also been a political row over a phone call between Taiwan’s leader and Mr Trump.

The call broke decades of US diplomatic protocol and prompted a protest from China.

Although the Trump team said it was spontaneous, there is growing evidence that it was planned weeks in advance.

Most recently, the New York Times reports that former senator Bob Dole worked behind the scenes to engineer the communication.

Mr Branstad said in a statement after Tuesday’s meeting that he had enjoyed a “very cordial conversation” with Mr Trump.

“While there has been speculation regarding an appointment to serve in this administration, I have no announcement to make at this time.”

His spokesman said reports of his nomination were “premature and not accurate”.

President Barack Obama has been helping Mr Trump with his appointments, the Republican businessman said on Wednesday.

One of Mr Obama’s recommendations had been followed, said Mr Trump, without naming which job it was.

In an interview after he was named Time Magazine Person of the Year, Mr Trump also confirmed a report that he had sold all his stocks in June.

“I don’t think it’s appropriate for me to be owning stock when I’m making deals for this country,” he told NBC News.

Without any tax returns disclosed, there is no evidence to support his assertion, or to assess the value of the sale.

He has promised to make an announcement next week on how he intends to step away from his multi-billion-dollar business empire.